Since its humble beginnings in 1919 as the twenty-fourth district government high school with an initial enrolment of 104 students, Dandenong High School has always led the way. It was the first secondary school south-east of the City in the market town of Dandenong; it then underwent a regeneration project, commencing in 2009, to become a ‘super school’ with seven new award-winning house buildings catering for over 2,000 students.

When the school opened as a result of the determined efforts of a group of leading citizens approaching education officials, students were placed in temporary accommodation in the local Fire Station, Temperance Hall and Church of Christ. The foundation stone was laid in November 1919 and by 1920, the permanent and substantial two-storey red brick building was ready. Almost immediately the growth in student numbers meant the facilities were inadequate, necessitating urgent extensions. This pattern was to be repeated throughout the coming decades. A new wing was soon added, forming its familiar quadrangle, visible today.

Part of the early school’s amenities, spartan as they were, included stables used by students arriving on horseback from nearby farms. The outpost nature of the school, and the fact it was one of only six suburban high schools, saw a significant proportion of students travelling long distances, spending well over an hour by bus or train, many coming from Gippsland. They also came from the Ferntree Gully and Scoresby districts, and from Oakleigh and Murrumbeena, along the Melbourne rail line.

The proud traditions of the school were forged early with the visionary leadership of the first Headmaster, Mr P. C. Langford. Langford came to Dandenong not long after experiencing the devastation and upheavals of the Great War, establishing a school that engendered both discipline and hope in a bright future for its pupils. The school’s colours of dark blue, light blue and red were derived from those of his Regiment, the 4th Light Horse.

He also chose the motto with care and it is one fit for any age: Faber Quisque Fortunae – Everyone is the Architect of their own Destiny.

A Personal Story: R. A. Reed

I made my first direct contact with Dandenong High School when, as a young teacher, I took a football team from Essendon High School to play Dandenong High School on the oval at the rear of the school. I think the year was 1927. I remember that it was a rough oval in those days, with one end appreciably higher than the other, and that the school building then consisted entirely of the original two-storey brick block, open on the northern side. As a matter of historical fact I have to record that Essendon won the match, but Essendon High was then a big school and Dandenong a small one.

However, Dandenong High School was known to me before this time, as I had been in Teachers’ College with some ex-students of that school, notably Reg Singleton, Fred Searle, and Marie Facey, and found that there was a strong loyalty to the old school. I well remember that Headmaster, Mr P. Langford, then a staunch bachelor and still a cricketer of some note, whose friendly personality made a deep impression on me. By the end of the 1920’s Dandenong High School was no longer a young high school; it had an assured place among the secondary schools of the State and was going from strength to strength.

I feel that it has never looked back. It has had its problems and difficulties at times, too many pupils at some stages, hardly ever enough room, poor facilities for special subjects and the rest of it, but it never lost its unique character, which appeared to me to combine rugged independence with a forthright approach to school matters. Perhaps it owed something to its semirural environment in the early days. It has never lacked progressive principals, great teachers, distinguished pupils, or enthusiastic and determined parents, and many of the improvements from the persistent drive of people such as these. As a building, Dandenong High School will always be something of an agglomerate, because so many parts of it have been erected at different times, but as a school it will always have cohesion. Dandenong High School is people, past, present and future. It is these people who give it strength. Long may it continue to flourish!

By the end of the 1920’s Dandenong High School was no longer a young high school; it had an assured place among the secondary schools of the State and was going from strength to strength.

In the past, on significant occasions, a School Anthem was sung. Two former teachers composed the music and words at the school. The lyrics emphasise the significance and legacy inherent in the school colours, and what they should inspire in all of us. The title, We Shall be Strong, comes from the chorus. These are the words of the four verses:

Dandenong High School, gateway to the future,
Proudly borne in battle, your colours flew.
The standard that led a regiment to conquer,
You give into our keeping to win renown anew.
Architects of fortune, labouring together,
Gaining inspiration from work and play,
The royal blue we bear has taught us truth and loyalty,
The trust of our companions we should not dare betray.
Heroines and heroes, wearing red for courage,
Forged a great tradition in days gone by,
We build for the future, proud of our achievement,
We meet the greatest challenge, our courage ever high.
Dandenong High School, though the years divide us,
Worthy sons and daughters we shall remain,
And when through the gate we enter on our journey,
Our courage, faith and loyalty will build a greater name. 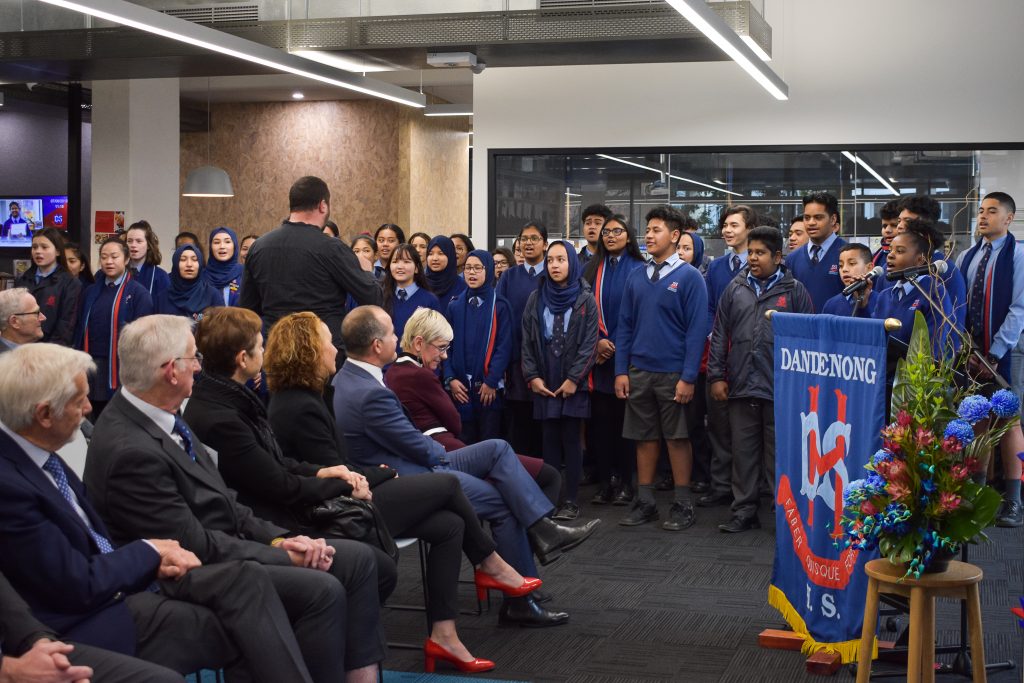 The events of the First World War seem so long ago one could wonder what on earth they have to do with us here today. A great deal, actually. History is a living thing where the past continuously flows into the present, moulding and influencing many aspects of our lives.

Let me give you three examples:

Firstly, there is the connection of Dandenong High School with Gallipoli. Our first Headmaster, Mr Percy Langford, served with the 4th Horse Regiment at Gallipoli. His unit was part of the original ANZACs and the school colours are taken from that regiment – red for courage, light blue for faith and royal blue for loyalty.

Listen to his own words explaining how the colours were chosen: “When I joined the 4th Light Horse Regiment our two colours had been red and white but on being sent to the Peninsula we had so many reinforcements after the evacuation that it was decided to divide the Light Horse into two sections (one went to Palestine and the other through France) and that meant we had four colours red, white and the two blues. In those days, to register school colours there had to be three, so one of the girls suggested that we combine the two regimental colours, omitting the white and arranging the other three to suit ourselves.”

Secondly, there is a school in France that sings Waltzing Matilda every morning. This is in a place called Villers-Bretonneux where in 1916 and 1918 two huge battles took place. The town was virtually levelled by German bombardment during the second battle when an Australian night-time counter-attack halted the German advance on Paris and changed the course of the war. It saved the village at a cost of 1,200 Australian lives that day. Now the children go to school every day with “Never forget Australia” written above their blackboards and on their shelter sheds and it is the Australian flag that flies at their town hall.

Thirdly, there is the story of Nelson Ferguson told in a play called The Glass Soldier. He was at the battle that day and he was almost totally blinded. The last thing he saw clearly was the beautiful stained-glass windows in a church. He came home to Melbourne and resumed his work as an artist until his sight became too poor. Instead he founded a stained-glass company and continued to work. He raised three children who came to DHS in the 1930s, a daughter, Jessica, becoming Head Prefect. In time his son took over the business and then eventually two grandsons followed in the family footsteps and produced wonderful creations in glass.

It was Andrew Ferguson, one of the grandsons, who was commissioned by the Ex-Students’ Association, on the occasion of the 90th Anniversary of this school, to craft the stained-glass window that now has pride of place above the front entrance.

So, on ANZAC Day, fifty years from now, when I will be long gone, remember my words and tell your children, and your grandchildren, the colours of your school were worn all those years ago by the men of the 4th Light Horse at Gallipoli. Remember and honour the past that gave you your future.

His unit was part of the original ANZACs and the school colours are taken from that regiment – red for courage, light blue for faith and royal blue for loyalty.